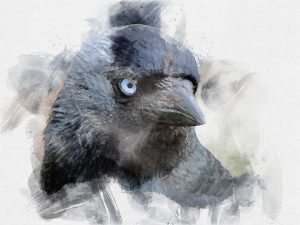 THE JACKDAW OF RHEIMS

The English clergyman R.H. Barham (1788-1845) was a prolific writer of myths, legends and poetry using the pen-name Thomas Ingoldsby. Collectively published as The Ingoldsby Legends, its best-known poem is ‘The Jackdaw of Rheims’, about a jackdaw which steals the ring of a cardinal, and is subsequently made a saint.

This tonal setting uses all but 25 lines of the lengthy poem, yet the narrative remains uncompromised. Although now dated, the poem still offers a humorous and relevant comment on today’s church.  In Trollopian manner, the poem debunks the power and wealth of organised religion and uncovers the potential for corruption within its higher echelons.  Indeed, the Cardinal is so outraged at the loss of his turquoise ring that he ‘solemnly cursed’ the ‘rascally thief’, showing little forgiveness or charity.

Whilst enjoying the rhythmic possibilities of this literary nonsense during the composition, the opportunity  to parody the excesses of established religion was not to be missed.

Besides reducing the length of the poem, it was decided to excise the final three lines in silent respect for hard won racial harmony. Barham’s conclusion refers to the eponymous Jackdaw being “canonized by the name of Jim Crow”. He would have been familiar with Victorian ‘black face laws’ in music halls of the time, and a song ‘Jump Jim Crow’ was a huge international hit with sheet music sold all over the world. ‘Jim Crow’ became a pejorative term for ‘negro’, and the Jim Crow Laws were state and local laws that enforced racial segration in the Southern United States.

Designed & Managed by Harcourt Communications © 2021
We use cookies on our website to give you the most relevant experience by remembering your preferences and repeat visits. By clicking “Accept”, you consent to the use of ALL the cookies.
Cookie settingsACCEPT
Manage consent

This website uses cookies to improve your experience while you navigate through the website. Out of these, the cookies that are categorized as necessary are stored on your browser as they are essential for the working of basic functionalities of the website. We also use third-party cookies that help us analyze and understand how you use this website. These cookies will be stored in your browser only with your consent. You also have the option to opt-out of these cookies. But opting out of some of these cookies may affect your browsing experience.
Necessary Always Enabled
Necessary cookies are absolutely essential for the website to function properly. This category only includes cookies that ensures basic functionalities and security features of the website. These cookies do not store any personal information.
Non-necessary
Any cookies that may not be particularly necessary for the website to function and is used specifically to collect user personal data via analytics, ads, other embedded contents are termed as non-necessary cookies. It is mandatory to procure user consent prior to running these cookies on your website.
SAVE & ACCEPT
Scroll to top
Skip to content